I would say about 2% of the time, I have a plan for my yoga class. And about 1% of the time, the class turns out to be much better than most. Not long ago, I taught a class that wholly focused on Ajna or 3rd eye chakra. I wore purple, I played 3rd eye songs (Purple Haze), and all my poses were focused on expressing that chakra. But a few times, when I have a script to follow, I totally go off script for whatever reason. Often I plan something and I get mostly beginners where the poses wouldn’t have worked. Or maybe I have such a small class that the energy wouldn’t be there to “feel” what I had planned. A class often needs lots of energy and this is sometimes helped by a large class. You have to force it more with a smaller class.

There are other times when I don’t really have a plan but develop a focus in the last minute. I may focus on a prop, like blocks or a strap. I may even focus on developing to a peak pose, like an arm balance or inversion. I may pre-plan a bit of it with a few notes, but usually its from experience. On a whim, I just start into a well-developed progression that I’ve learned over the years.

Other times, I come in without a plan and just go with the feeling of the class. I see who’s there and I know what they like so I do that. Its organic in a sense that they decide the class, not me. And quite often this works really well. It works great for a smaller class where I can design the class just for them. And they leave very happy.

Sometimes, I go into a class without a plan, but either my mind or my body or both are a complete wreck. Maybe I’ve just traveled for many hours. Maybe I did a hard CrossFit workout and my body is fried. In this case, I’ll totally project onto my class. If my hammies ache, I do a lot of hammies. If my back is sore, then it turns into a back workshop. Its kind of selfish because the class is all about me and not about them. But because my body and/or emotions are totally into it, its completely from the heart. And people can sense vulnerability and authenticity. So in the end, that style works too.

But the best classes are like the one I taught last night. It was Candlelight Yoga and I try to set the mood to some romantic candlelit setting. I imagine we’re on a floating dock on the Riviera in Montecarlo or some such exotic place. The music is soothing and makes you want to feel good. It is much more than a yoga class. It turns into an experience. Its like we are actors in a play. We play off each other and synergize our energies. I can really sense when they are grooving to what I’m giving. There are crescendos, andante and allegro, and a musical score that moves as we move. But mostly, they practice how I would practice in a private place with my eyes closed and nobody is looking. Its not as much of a performance as soul-soothing self-exploration. Some of the moves don’t make sense on paper. You’d never write out a sequence that expresses what I do. But it is all natural to my body. It is as organic as it gets. There is nothing false or pretentious about it. And when its all over, our lives are all in a better place. You can’t leave a class like that frustrated or worried about the world. Its like you are swaddled in a warm blanket with a butterscotch candy in our mouth. There’s nothing like it. 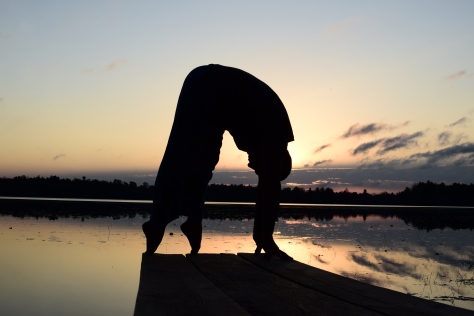